I feel bad for startups interested in leveraging content (don’t you just hate that word?). They excitedly look for advice, only to find bullshit like leave comments on other blogs, as if anyone has that kind of time on their hands.

Or worst of all, they’re greeted with hoo-rah motivational garbage that doesn’t actually say anything.

I certainly don’t have all the answers, but the Help Scout blog has seen some pretty impressive growth by following a few fundamentals that (I believe) should never be forgotten.

This is absurdly important for B2B businesses, as the answer often isn’t as clear as you think.

Here’s an example — since Help Scout is a support desk for small businesses, we assumed that one of our main personas was going to be ‘Help Desk Heidi’, the experienced support manager who would find Help Scout and sign up on behalf of her company.

While we were correct in a general sense, we were wrong on scale. It turns out that Heidi is one of our smaller personas instead of a main one—for some reason, support managers just aren’t signing up directly. We found this through analyzing customer data and surveying account owners and noting their job titles.

This resulted in a new persona in the ecommerce space that we had listed as a secondary persona. This person—to keep it brief, the “IT guy”—was far more likely to sign up directly on behalf of an established ecommerce business.

Here’s the thing: we still need and want to appeal to ‘Help Desk Heidi’ with our content as she influences the support team. She is the advocate, even if she isn’t the buyer.

A great article recently published in the Harvard Business Review explores this topic from a different angle, but I think it is very relevant to creating content:

The bottom line is this: The strategic choice of primary customer—with special emphasis on “primary”—defines the business. This is certainly true at Amazon, which serves four very different types of customer: consumers, sellers, enterprises, and content providers. You might think that it considers all four customer groups to be equally important. But the company’s choice of primary customer is reflected clearly in its well-known mission “to be the world’s most consumer-centric company.”

Amazon devotes maximum resources to pleasing consumers, even if that means sellers or content providers sometimes feel shortchanged (sellers whose storefronts are hosted on the Amazon platform have been known to sue Amazon for more resources). This unwavering focus on consumers has created innovations such as prime free shipping, detailed product reviews (including negative ones), look-inside-this-book, and the listing of lower-priced products from off-site competitors.

As the cases of Merck, Google, and Amazon illustrate, your most important customers are not those that generate the most revenue but those that can unlock the most value in your business.

That last line is really interesting. On the face of things, it might seem like we should drop the appeal to Heidi, but from our research, we’ve found she plays an important role in getting the rest of the team on board.

“Winning” her over thus becomes very important, perhaps more important, even if she isn’t the person who clicks ‘Buy.’ This isn’t an easy topic to sum up, but it is one to always keep in mind when pursuing a content marketing strategy, especially in B2B.

Many startups avoid content marketing because running a blog takes up a ton of time.

That’s why for young companies who don’t have a regular marketing person, I recommend you go big.

One piece of highly visual content that solves a major problem, and motivates the customer to see the value you bring. We only have one writer, so we pursue this strategy ourselves.

Instead of trying to crank out multiple shoddy customer service articles every single day, we wait, and tend to put out big pieces of content that attract a ton of people at once.

Our latest example is The Art of Customer Loyalty, a huge guide that shows businesses how to create and increase their number of loyal customers. It shows why customer loyalty is important, and motivates people to use our support software. 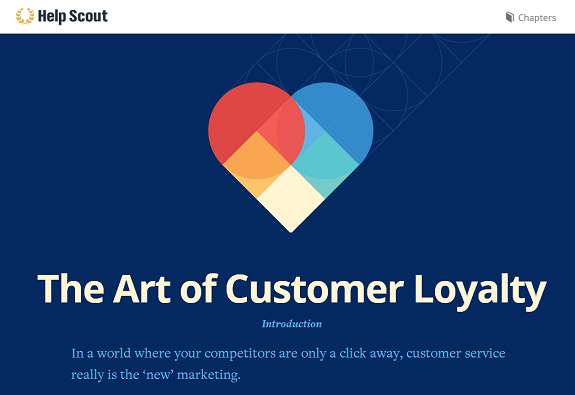 Obviously, I am a full time employee, so I am also able to contribute to the blog once a week as well. But if I were running lean and doing most things myself, I’d stick to creating one exceptional work and promoting the hell out of it, not daily blog posts.

Long guides like this have helped us move up in keywords we thought were impossible to attain. We finally broke into the top page for “customer loyalty” (very tough keyword) with this new gigantic release, and it’s only been live for about 1 week. 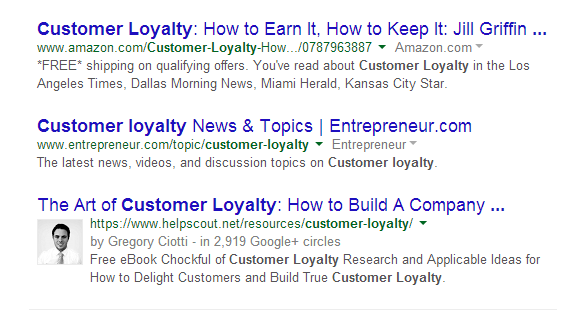 In other words, it’s far better to take your time and publish only when you can be awesome.

Email is still the channel of choice for people who want to make sales, not #hashtags.

This is especially true for B2B. For the ecommerce company selling women’s fashion: I totally get and support your Pinterest use! For the B2B software company: why the hell are you bothering with Facebook?

Do you really want to compete with BBQ + bikini photos in the summer when you can just grow an email list? It’s the professional social network that everyone already uses.

You also won’t have to deal with audience dispersion. Having a dozen social networking accounts is more likely to spread your fanbase thin than it is to add a significant amount of additional readers (again, everyone already uses email).

The #1 piece of advice I have for collecting emails is to simply set your blog up so that it’s easy to join your newsletter. This doesn’t mean you have to use those exit pop-ups that insult you for declining (“No, I’m a stupid shit who doesn’t want free email updates,” how annoying).

Sounds dumb, but I see so many blogs hide away their sign up form amidst a bunch of crap on the sidebar.

Check out what we decided to do on our blog’s homepage: 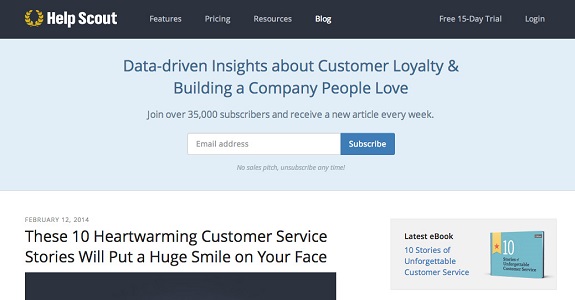 A feature box allows you to perform the “Header Removal Test,” which answers the following question:

If you remove the logo and tagline from your website, will people still know what your site is all about without scrolling?

A feature box allows you to accomplish this and offers an easy way to sign up. You’ll be surprised how many people will use this location once they’ve made the decision that your blog is something they want to read (test it for yourself).

This is an approach I’ve discussed before which takes the guesswork out of “what is the goal for this article?”

You know what white bread content is—it’s very common on the web. Wheat bread content is different and more difficult to create. The reason I separate the two is because creating popular content that also converts is not easy; it’s quite challenging to do consistently. When you have a more obvious goal, coming up with article ideas is easier.

Ideally, wheat bread content will do one of the following things:

If you manage to get people to refer to something again and again, you’ve succeeded.

The “wheat bread vs. white bread” idea is actually an example of wheat bread! The next time you write something, you might think: “Is this new article of mine going to be white bread or wheat bread?”

That means you referenced something that I taught you, which means my mission is accomplished!

This is that “idea virus” that marketers are desperate to create. In an upcoming post on our blog, I’ll be showcasing how we use P2 to post support feedback. Instead of just explaining it, I’ll be referencing it as “The Customer Support Bulletin Board,” an idea that I think many support teams will steal (coining a term or idea can be smart, no matter how small it is).

Now, they’ll be using a system I showed them to do their work even better. That is goodwill and recognition that only thoughtful “wheat bread” content can create. Make sure you’re not just making yet another 50 item roundup!

Syndication: more bang for your buck

Syndication seems like the holy grail for popular TV shows, but it is incredibly effective for blogs as well.

Syndication gets you more bang for your buck than guest posting, because you can take proven articles and simply put them in front of a new crowd. There is also “self-syndication,” or posting your articles on platforms like Medium, Quora, Tumblr, and Svbtle.

Here are a few lessons and caveats I’ve learned from having my content syndicated across the web:

Almost every major content farm—from Huffington Post, to Forbes, to FastCompany, to Entrepreneur.com, to Business Insider, to Lifehacker—offers syndication if you can get in contact with a contributions editor and make a persuasive pitch as to why your article will bring in the pageviews they need. Leverage the fact that you have an existing audience as the cherry on top.

Being controversial for controversy’s sake is a mistake, but if you hold a few strong opinions in your industry, it can be good to play them up in order to help the idea spread.

The key seems to be to pick topics that already have division, and to plant your flag. The topic also needs to be of ‘low-controversy’, so nothing near religion or politics.

According to research from Wharton Business School on When, Why, and How Controversy Causes Conversation, it turns out that people tend to avoid discussing things of “high” controversy in many instances because it can make situations and conversations become uncomfortable:

Any debate that takes a “This vs. That” stance on highly discussed things, people, or ideas can create the sort of argument and controversy that you are looking for, but there has also been some interesting research that shows people care deeply about their 3B’s:

So, if you create division within someone’s behavior, beliefs, or feeling of belonging, they will seek to either confirm or disprove your stance, but either one is good for you because it creates division and discussion.

The last thing to consider is the tried-and-true strategy of “newsjacking,” or adding your opinion to an already hot debate.

This works, no doubt, but I’ve yet to use it for us, because I believe you need to tread carefully to avoid being smarmy. If a topic on your industry is on the rise however, riding the wave will generally work.

It did what all ads are supposed to do: create an anxiety relievable by purchase.

Seems strange to bring a quote like this up, but the truth is that content needs to have similar goals: to educate customers on what they can do and to motivate them to do it, within the context of your product.

This doesn’t need to appear in every article. Imagine if each Help Scout blog post started out with “You see, customer service is important because…”, how boring would that be?

Instead make it a part of your overall communication strategy. Look at how I incorporated data into What Bad Customer Service is Costing Your Business. Point being, the overarching theme of our blog paints the picture that great service is just damn good for business.

This makes future articles on what to do more effective with longtime readers. The why also attracts the right sort of people, who may already hold the same beliefs that you do.

So remember that educating won’t be as effective if you never spend anytime motivating people to do the things you are recommending.