If there is one rule that permeates the web, it’s that controversy is key if you want to get people talking.

Most of us recognize this, but we implement this strategy so poorly that it’s painful to watch. I’ve witnessed companies turn their publication into a vendetta machine, trying to stir up controversy by calling out individuals and other businesses.

That strategy is dumb because it puts you on a fast-track for being viewed as an attention grubbing sleazebag who lacks professionalism and the ability to keep their mouth shut.

And yet, I still advocate for creating the right kind of controversial content. So, how can we have our cake and eat it too?

If you’re a brand publication, you need to recognize that you’re not nearly as bulletproof as general purpose mainstream media outlets.

The news can call people out left and right. The news can talk about highly controversial topics like politics, religion, and tragedies

Your company publication cannot, and should not bother with these topics of high controversy. This should be obvious to many, but when I say “controversial content,” many people confuse it with the things that news sites publish.

There is a much more specific definition that applies to business blogging, and even some research from Wharton that shows us that it’s this kind of “low” level controversy that we should pursue in the first place.

While I’ve come across some strange research on toilet paper usage (not joking), there’s only one facet that has to do with the psychology of controversy. Take a look at the image below. 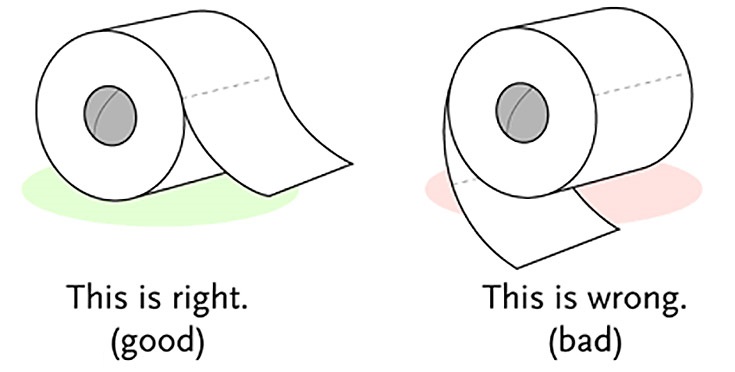 Apparently, this is a hotly debated issue in bathrooms across the globe.

Don’t believe me? Check out the 6,000 word article, with multiple sources, on Wikipedia about “toilet paper orientation“, in particular this passage right here.

Did a regular columnist who’s been publishing for decades just say that that the toilet paper orientation argument was the most controversial thing she’s published?

So, why does this type of argument work so well? There is actually some fascinating research on the matter…

According to research from Wharton Business School on When, Why, and How Controversy Causes Conversation, it turns out that people tend to avoid discussing things of “high” controversy in many instances because it can make situations and conversations become uncomfortable.

In other words, people have no problem arguing about toilet paper issues, but will shy away from controversy that crosses the social line. That’s why an issue like toilet paper orientation works so well — it’s a topic everyone can relate too, it creates division in two very distinct camps, and it is an argument of “low” controversy, in that nobody’s feelings can get hurt.

If you’ve ever wondered why people love to argue about dumb stuff, well now you know. But how can you use this sort of argument to your advantage?

The right way to be controversial

Any debate that takes a “This vs. That” stance on highly discussed things, people, or ideas can create the sort of argument and controversy that you are looking for, but there has also been some interesting research that shows people care deeply about their 3B’s.

So, if you create division within someone’s behavior, beliefs, or feeling of belonging, they will seek to either confirm your stance or disprove your stance, but either one is good for you because it creates buzz.

This is why I noted in the above section to get it into your head that your blog is not bulletproof… because at face value, these 3B’s might inspire you to start attacking deeply seeded beliefs of behavior that would cause outrage at your brand rather than a lively debate.

Let’s take a look at a few examples so you know exactly how to execute (and avoid massive backlash).

Example #1 — Why Steve Jobs Never Listened to His Customers

This was a post I did on the Help Scout blog, and after being published, it hit the front page of HackerNews and did about 9,000 unique views in the first 12 hours. What sort of controversy did I stir up?

Well, in the business world, there is a pretty big debate around customer feedback for innovation, or “sheltered” innovation. The argument that many make is that customers don’t often know what they want, and when asked, they’ll just ask for improved versions of what’s already out there.

The other side views customer feedback as essential to innovation, with customers providing insights about your product that would be impossible to gain without their feedback.

It’s a debate that people care about, but that won’t offend anyone.

No surprise then, when the post started picking up steam on social media, with most people sharing it with commentary (“I agree with this wholeheartedly” or “This is getting things wrong…”). The comments left were multiple paragraphs long, with some strong opinions being shared from both sides.

Example #2 — What Multitasking Does to Our Brains

The Buffer blog has a wider reach than us, so this post really took off, and even got a Lifehacker feature. As you can probably guess, this post takes shots at a very common form of Behavior, but it turns things up a notch with a technique I love…

Instead of Leo making the argument against multitasking on his own, he instead serves as the messenger (ie, “Don’t kill the messenger!“), citing data and research and simply presenting the evidence.

Using research or a credible source as a shield allows you to deflect the debate away from a ‘Them vs. You’ battle into a ‘Them vs. the Data,’ you should definitely still take a side, but remember that an argument with relevant sources can go much farther (in terms of reach and controversy) than a an argument made purely on experience.

Consider the OKCupid article Gay Sex vs. Straight Sex, it takes a really risky dive into behavior, but because of the presentation of statistical information, it did far more good for OKCupid than bad. Not that your next article needs to be so scandalous, I just want to reiterate how important data and other sources can be when creating a controversial argument.