An apology to growth hackers (kind of)

You know growth hacking is still undergoing an identity crisis when the top entries at GrowthHackers.com regularly look like this: 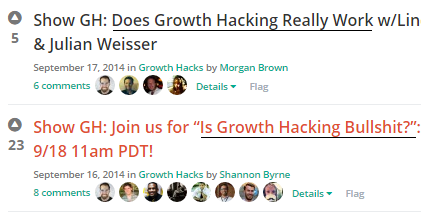 Growth hacking has an image problem, not an intentions problem.

Anyone who denies the growing importance of collaboration between dev/IT & marketing should read this post on the Harvard Business Review—these departments now work so closely in many new (and even traditional) companies that a person’s ability to bridge the gap is a great asset.

So if you’re someone with coding skills, marketing know-how, and a drive to create sustainable growth, you can be a growth hacker. Fair enough.

Where I think things went wrong is in the proliferation and interpretation of the word ‘hacks.’ Dharmesh Shah recently asked if much of the controversy around growth hacking could have been avoided if we favored the term growth engineers, and he’s probably right.

Just like the obnoxious use of the word “lifehacks” in favor of tips or advice, specific tactics for growth started to be referred to as growth hacks. What Hotmail did was a hack. What Dropbox did was a hack.

This is not only supremely annoying (a referral program is nothing new), but it worsened when ‘growth hack’ started being referenced when discussing shady behavior.

Now, the unsustainable practices of startups like Viddy were being called growth hacks. This caused many marketers to look at the term in the two following ways:

To top it all off, you had growth hackers start to refer to oldschool marketing practices as being hacks. Sorry folks, but when you try to repackage shit that marketers have been doing for years under a new euphemism, people are going to push back.

What was (and is) being overlooked is how a growth department, or a growth hacking team, adds genuine value to a technology company by being able to knock down the walls between dev and marketing.

Things can get siloed in larger organizations, and there can be situations where no one is working between marketing, sales, and product. A small team of designers/engineers can make changes across departments. A growth team is a good way for a larger organization to understand this team’s mission.

Because growth teams are typically comprised of designers/engineers, they’re able to run experiments that can have a BIG impact. Sometimes the experiments are so creative and impactful that they’re seen as “hacks” or overnight successes. But really that team is probably hyper organized, spending lots of time with customers, and that one “hack” was the 23rd experiment shipped that month.

Cheers! I think this is a much more practical definition than the cop-out one of “more innovative, bootstrapped marketing.”

I also think many marketers who are missing the point of a growth team need to step back and understand what growth hacking is supposed to be about.

But I only apologize “sort of” because it is growth hackers themselves who spurred on a fair portion of this nonsense—the next time you discuss a content marketing tactic, don’t call it a growth hack. It might be a part of the growth process, and it deserves to be discussed on places like GrowthHackers.com, but it isn’t a hack.

Perhaps the best growth hack of all is the time saved by not arguing about growth hacking.