Assuming that writing is leadership at scale, a writer’s strongest ally is re-publishing; previously written words can often find a whole new audience.

With that in mind, from June 2nd – July 2nd I started a little experiment. I put LinkedIn’s new publishing platform to the test.

The plan was simple: Monday through Friday, I would post 1-2 previously published articles of mine on the site and gauge the response. I was primarily concerned with audience quality, overall reach, and deducing which topics worked on LinkedIn.

The results have been interesting: I generated 255,262 total views in a month. Since LinkedIn publishing is, at the time of this writing, a relatively new feature for the site, all of my results are from a starting point of zero:

Dividing total views by number of posts yields an absurd 7303.6 average views per post. However, a single article contributed to 212k of the views all by itself. Taking that anomaly out, we’d have 42,674 total views with 34 articles, for an average of 1255.1 views per post; still respectable!

Well worth the effort, but sharing my numbers with you isn’t exactly helpful by itself. Below I’ll break down the foremost lessons I learned in this 30 day publishing experiment.

What topics work on LinkedIn?

As one might expect, all things related to business, careers, entrepreneurship, hiring and government/finance can find a place on LinkedIn. It is generally considered the professional social network and is thus populated by a professional / executive userbase.

I was, however, quite surprised at the popularity of certain channels — LinkedIn’s version of categories — and how they managed to attract such huge communities on LinkedIn.

I ranked every top LinkedIn channel by total followers; I can put the full list out later if people are interested, but here’s a list of channels #11 – 22 to showcase the variety that appears.

You can also use a site like BuzzSumo, input LinkedIn.com, and then filter the content through a specific keyword (ex: “customer service”) to find the most popular articles on the site that contain that phrase.

Find this under “Advanced Search Options.”

Generally speaking, the thing to remember is LinkedIn is primarily used by people looking for industry insights.

Although it is somewhat common for people to exaggerate their job titles, if my follower data from LinkedIn is any indication, seniority is abundant: 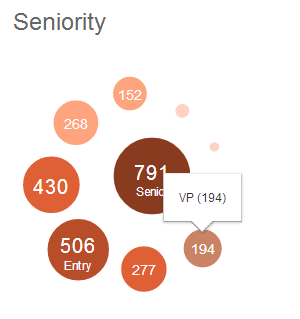 Perhaps more importantly, it’s easy for people who don’t consider themselves “writers” to break into topics that generally struggle to find an audience elsewhere. The sort of people (and articles) that get traction on the site have a lot of variety: 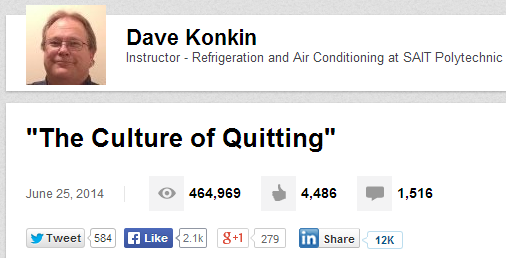 Where else would one find a community of 107,000 people online that are interested in the construction business?

It gets even better if you’re in a more general business topic that usually doesn’t have the “social currency” to get much lift on social media — I’ve found the 1 million follower customer experience channel to be a great place to feature Help Scout’s content.

To be perfectly clear, you should still always post on your own, self-hosted site first. It’s never smart to let someone else own your words. But re-publishing on LinkedIn might become a key part of your distribution if you’re in an otherwise un-sexy topic.

The main way that an article will get traction on LinkedIn, outside of your own promotional efforts, is through getting featured on a particular “channel” within LinkedIn. 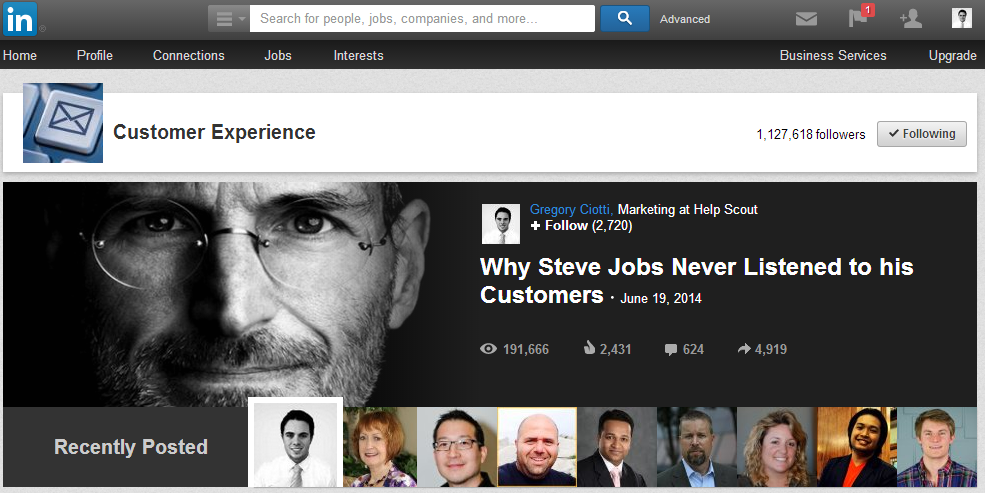 Once you’re featured in a channel, you will generally not be featured again until your first post runs its course and is removed.

This means that if you write about a variety of topics, you should stack your articles in a way that spreads things out — posting two articles about the customer experience in two days might result in one getting picked for a “channel feature,” but it will also guarantee that the other won’t get featured.

But if you had posted about two different topics, it is possible that both will get featured — my articles have.

Two channel features in the same week will definitely get the ball rolling.

Side note: you don’t actually “select” a topic when you publish on LinkedIn, it seems that someone will manually decide which channel your article fits in. You’ll know it has been featured by checking the bottom of the article.

The only control you have (for now) on getting selected is in putting out your best work possible, giving it a little “push” with some personal promotion, and making sure that you diversify your topics enough so that you can get multiple channel features in the same week.

The headline and the image

The importance of these two elements is nothing new, but it deserves to be mentioned here: the way LinkedIn is laid out places an inordinate amount of importance on both.

On both the sidebar and in content navigation pages, the only preview available for any article is the headline and the image.

I’ve certainly seen people get away with generic stock photos, but generally these folks already had large followings (or were Richard Branson), and often the topic was just fluffy enough (“9 Ways to Be Successful”) for the headline to do most of the heavy lifting.

For the rest of us, I would select your headline and image carefully, making sure both play into the theme of the article and complement one another — this is LinkedIn, so “You Won’t Believe What Happened Next” is to be thoroughly avoided, but all of the classics (numbers, strong words, curiosity) work just the same.

Closing articles with a call-to-action

The interesting thing with self-syndication is that you control the promotional aspects of the article — with this in mind, I would publish many of your LinkedIn pieces with an obvious CTA.

For many of my articles, I add a simple byline that I copy and paste along with a final section that brings attention to one of Help Scout’s free guides. 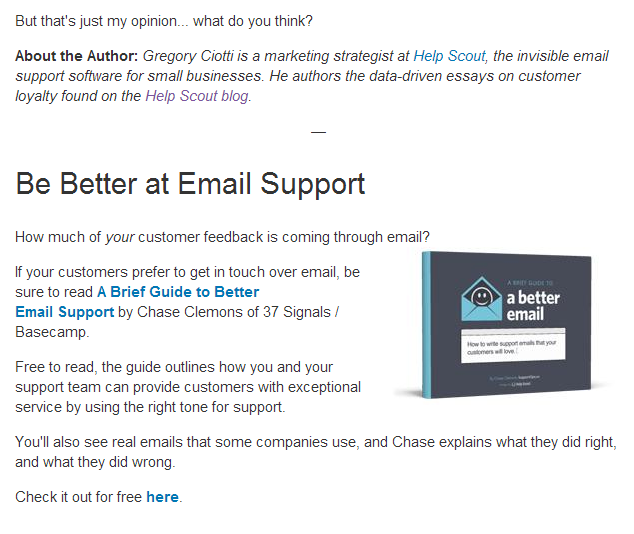 Some of these have directed up to ~1000 unique visitors to individual pages on our site, and they all follow a pretty simple formula.

All of our CTA’s point to open resources — I imagine the results would be great for those seeking to grow their email list if they pointed to an opt-in.

I just built a quick newsletter page for my site, and look at how it’s performing:

As long as you keep sending quality traffic to a page like that, you’ll continue to see solid results from re-publishing.

Should you split up long articles?

I don’t have a ton of experience with this, but I’ll answer with a tentative “Yes.”

It does appear that splitting up some of your longer essays into separate posts on LinkedIn can be really effective.

My first experiment with this was to split up our article called Research Reveals What Makes a Successful Leader into two separate posts on LinkedIn. The thinking is that people on LinkedIn are likely browsing during work, and aren’t as likely to come back to a LinkedIn post later. This is simply my hunch, though.

If you’ll allow this assumption, it would be logical to assume that short and punchy is a key writing trait to keep in mind — having depth while still being around 1000 words.

You’ll also have the opportunity to nab a channel feature twice if you spread it out. Not that you should be focusing on quantity over quality, but rather that you should view re-publishing as a way to experiment with chopping up some of your longer work.

As I continue to publish on LinkedIn, I’ll toy around with this more thoroughly.

When is the best time to publish?

Frankly, most “data” on the best time to publish that I’ve seen is useless.

Everything around LinkedIn says “during work hours,” and drills down to the super-specific times of 7am – 6pm.

I unfortunately don’t have much to add myself as I’m relying on anecdotal evidence and don’t have a great way to track how time is affecting anything, but my gut tells me that any “down time” around work hours probably works best, these being:

LinkedIn definitely shuts down after traditional work hours, and I’ve yet to see any meaningful traction on the weekend.

I’ll try to keep tabs on this as I publish, and hopefully in the future someone will gather meatier data on this topic.

Want a job? Write on LinkedIn.

Here’s a last little note I’ll add for people who actually use LinkedIn for their job hunt — you should definitely be writing.

Profile views tend to skyrocket if you publish a piece that gets any traction:

In my connections, I’m in the top 1% of profile views — and the only thing I currently use LinkedIn for is to write!

If your profile is even the least bit optimized, you should be able to get people to view your profile. Basically, there is no better way to currently put your LinkedIn profile to work than by publishing under it.

This is obviously just a preliminary exploration of LinkedIn publishing for now, when I have a few more weeks under my belt I’ll definitely send out an update.