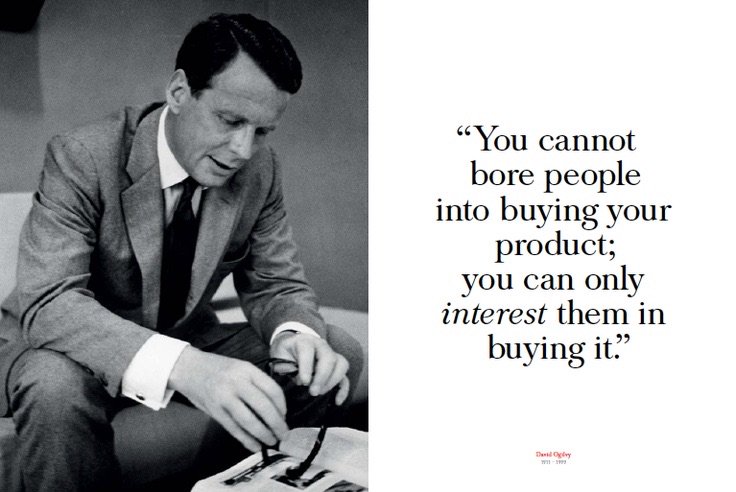 All marketers should be voracious readers. One book on my shelf I feel is deserving of more attention is Confessions of an Advertising Man by David Ogilvy.

It’s much more than book on advertising; there’s an ample amount of wisdom on topics like candor, management, and creativity. And of course it’s delightfully written.

Each line of prose is dripping with humor-laden bravado. My personal favorite:

When Fortune published an article about me and titled it: “Is David Ogilvy a Genius?,” I asked my lawyer to sue them for the question mark.

Fortunately, Ogilvy’s confidence never interferes with his cunning. This book is oft-cited by advertising professionals as being a must-read, along with more modern classics like Hey Whipple: Squeeze This.

At the beginning of the book is a short essay titled My Last Will And Testament, which reads like a list of commandments. The lessons are better seen as basic rules of advertising to be revisited over and over again should an aspiring marketer begin to lose their way; their value lies in how the individual interprets them.

I’ve yet to see a faithful version of this “last testament” online, so I thought I would share it below (perhaps my Google-Fu failed me).

At eleven points, it is worth committing to memory, sans one. What follows is exactly how it appears in my version of Confessions.

Ogilvy’s last will and testament

I started my career in research with the great Dr. Gallup at Princeton. Then I became an advertising copywriter. As far as I know, I am the only creative hot-shot who started out in research.

As a result, I look at the creative function through the objective eyes of a researcher. These are the most valuable lessons I have learned:

(1) Creating successful advertising is a craft, part inspiration but mostly know-how and hard work. If you have a modicum of talent, and know which techniques work at the cash register, you will go a long way.

(2) The temptation to entertain instead of selling is contagious.

(3) The difference between one advertisement and another, when measured in terms of sales, can be as much as nineteen to one.

(4) It pays to study the product before writing your advertisements.

(5) The key to success is to promise the consumer a benefit — like better flavor, whiter wash, more miles per gallon, a better complexion.

(6) The function of most advertising is not to persuade people to try your product, but to persuade them to use it more often than other brands in their repertoire. (Thank you, Andrew Ehrenberg.)

(7) What works in one country almost always works in other countries.

(8) Editors of magazines are better communicators than advertising people. Copy their techniques.

(9) Most campaigns are too complicated. They reflect a long list of objectives, and try to reconcile the divergent views of too many executives. By attempting to cover too many things, they achieve nothing. Their advertisements look like the minutes of a committee.

(10) Don’t let men write advertising for products which are bought by women.

(11) Good campaigns can run for many years without losing their selling power. My eye-patch campaign for Hathaway shirts ran for twenty-one years. My campaign for Dove soap has been running for thirty-one years, and Dove is now the best seller.

It is only point #10 which I would outright contest.

Ogilvy, born in 1911, has written his fair share of now archaic and sexist internal documents on selling to women. This rule feels more like a sign of the times than evergreen marketing advice. Ogilvy wrote in later editions of Confessions that he wished he’d done a better job highlighting the exceptional women he worked with in the book.

The rest of these laws can easily be wrestled with today and deserve regular revisiting. Most marketers are susceptible to the “temptation to entertain,” myself included.